Solar Inverters-- Their types and suitibality

One of the most important component of any Solar PV system apart from Solar Panel’s  is Solar Inverter. Inverter  converts the DC power generated by Solar panels to AC Power and make it suitable for use. To understand what type of inverter to use, we first need to understand the basic function of inverter and how it works.
Reference Voltage
As the amount of sunlight falling on the panels varies during the day (due to clouds, etc.), the power output from the panels also varies. As this variation could damage equipment that is powered by solar, the inverter continuously matches the PV plant’s output to another source of steady power. Therefore a rooftop solar PV that generates AC power will always needs another source of power (whether the grid or diesel generator or batteries) to provide a reference voltage in order to function. If the inverter is designed to use only grid power as a reference voltage, the plant will not generate power even if there is ample sunlight.
Anti-islanding
When a power failure occurs, a portion of the grid isn’t energised. This non-energised portion of the grid is known as an island. If the solar plant is pumping electricity into this non-energised portion of the grid during a power failure, it might cause utility personnel who are working on the grid to be electrocuted. To eliminate this risk, the inverter in the solar power system turns off the power from the plant. (See related blog- Do rooftop solar plants generate power during power failure? )

Kinds of inverters
As it is the inverter that determines whether the plant continues to function or not during a power cut, we need to only understand the different kinds of inverters to ensure we have a rooftop solar plant that generates electricity even during power cuts. There are basically 4 kinds of inverters.
Grid-tied –

These inverters are primarily designed to supply the generated power to the grid and also power the load while grid power is available. This inverter will NOT generate power during a power failure because it uses only grid power as a reference voltage and cannot function in the absence of grid power. 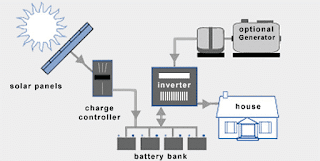 These inverters do not work with grid power and are designed to work only with a battery backup or diesel generator in off-grid applications. They are suitable for applications where grid power is not available at all, but are not the right choice if you need your solar plant to work in conjunction with grid supply. 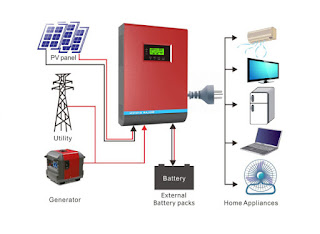 These inverters work both with the grid supply and with either a battery backup or diesel generator to support the load even during a power failure.
Hybrid inverters (also known as bidirectional inverters) are a one system solution for a complete solar PV system. They can automatically manage between 2 or more different sources of power (grid, diesel, solar). They have inbuilt charge controllers, MPPT controller, Anti Islanding solutions, DC and AC disconnects and other features like automatic turning on/off of the diesel generator, automatic data logging, and various kinds of protection for the different components of the system, making them ideally suited for applications that require management of power from different sources

Conclusion- It is therefore critical to understand the purpose the rooftop solar PV plant is to fulfil before selecting the inverter. As vendors use various terms to refer to different components we urge you to verify if the inverter will supply power during power failure by specifically discussing this issue with the vendor, rather than going by any label assigned to the product.